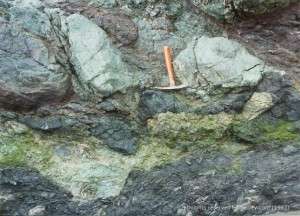 Bimrocks are very common. So there is no excuse to ignore them. So I don’t… Anyway: I live and work near San Francisco, which hosts the Franciscan Complex (“the Franciscan” for short), a regional-scale jumble of shards of earth’s crust, interspersed with some of the most spectacular melanges and bimrocks in the world. I have written some on such rocks, but others write far more: there are thousands of papers on melanges, a good proportion focused on those of the Franciscan.

My research and professional contributions on bimrocks are freely available at my bimrocks website. My most recent contribution: Geopractitioner Approaches to Working With Anti-Social Melanges, a chapter in the book in Special Paper 480: Mélanges: Processes of Formation and Societal Significance, by John Wakabayashi and Yildirim Dilek, published by the Geological Society of America. Wakabayashi and Dilek’s  full-text introduction to the volume is available at the GSA website and is a good place to start if you want to learn more about melanges. For some overall guidance see the Introduction and Summary Lectures for the Short Course taught in 2017 at Medellín, Colombia (Lecture PDFs can be downloaded); or, the annotated  “Introduction to Bimrocks”,

Despite the thousands of geological papers, there are few engineers who specialize  in, or research, bimrocks. I am one of those few. Some example projects: